Yacht Charters are great orientations to cities and can be considered a touristy thing to do. Mai Tai Yacht Charters are a combination of sightseeing, wildlife sighting and a wonderful perspective of America’s Finest City. Come along with us and see some of San Diego’s most famous attractions from the water.

Take advantage of the always beautiful San Diego weather and spend some time cruising the bay. The Big Bay is always full of activity and there is never a shortage of scenery.

A San Diego Bay tour starts in the northern part of the bay first passing by Harbor Island. Next, we head east to one of the unique attractions in the city, the Maritime Museum. It has a collection of historic sailing vessels including historical ships, steam ferries and a B-30 Soviet attack submarine.

Star of India at the San Diego Maritime Museum

The Star of India is a standout as the “world’s oldest seaworthy tall sailing ship”. This ship was built in 1863 and circumnavigated the globe 21 times with some lasting a year. They have a program where elementary school kids pretend to be sailors with actual duties and wake up calls and spend the night here. My daughter did this a few years ago and had such a memorable experience. Her original name was Euterpe who was the Greek muse of poetry and music. 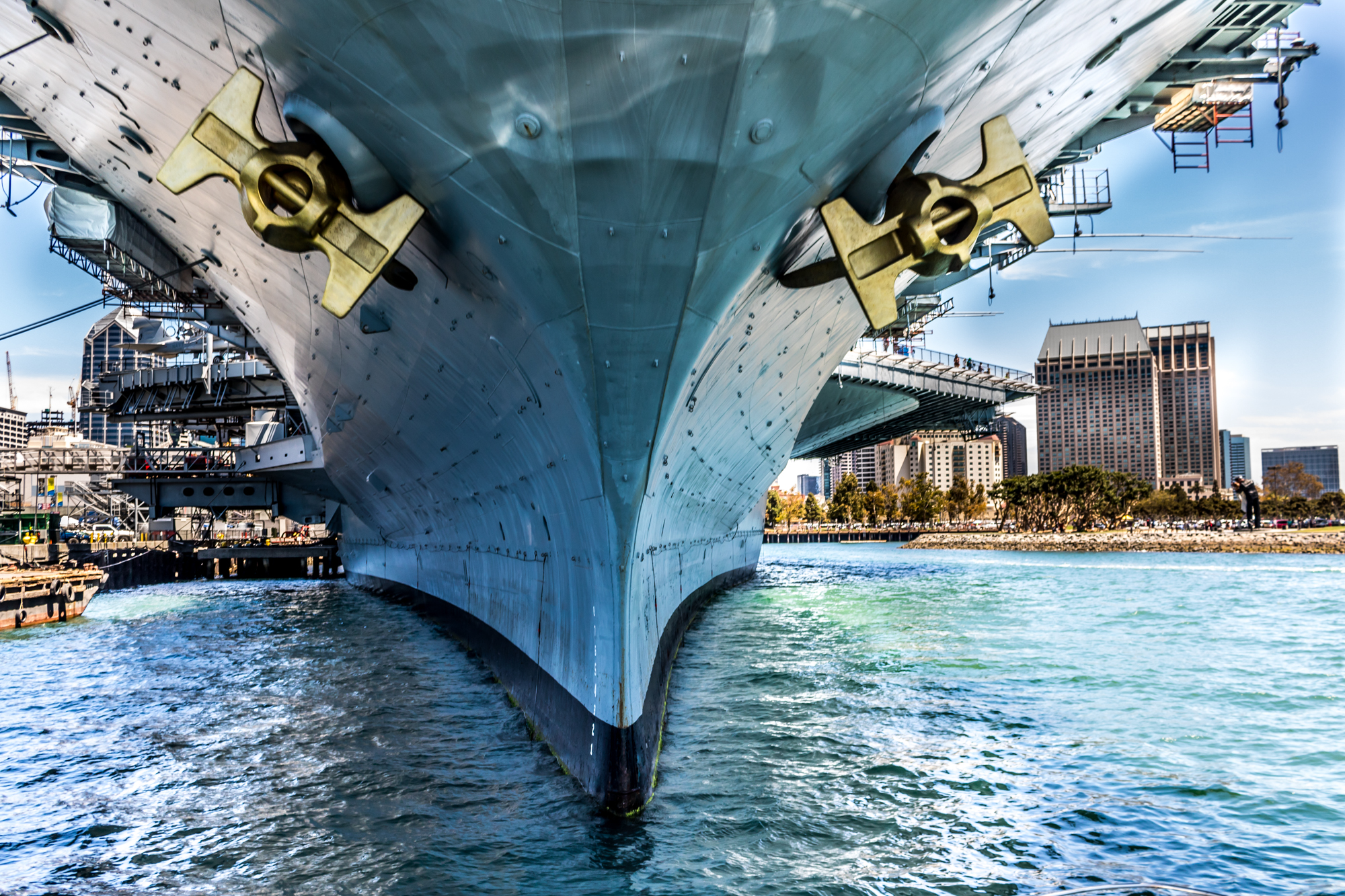 Charters includes seeing the USS Midway Museum up close. This was the longest serving aircraft carrier in US Naval history from 1945 – 1991. It is now a museum including 24 restored aircrafts.

The next part of our charter heads toward the southern part of the bay. Coronado Island is a great day trip option. It’s got the relaxed, beach town atmosphere but also seems detached from the city despite its location across the bay. The waterfront includes multi-million dollar homes with enviable views. The only way to access the island is through ferries or by using the over 2-mile Coronado Bridge. 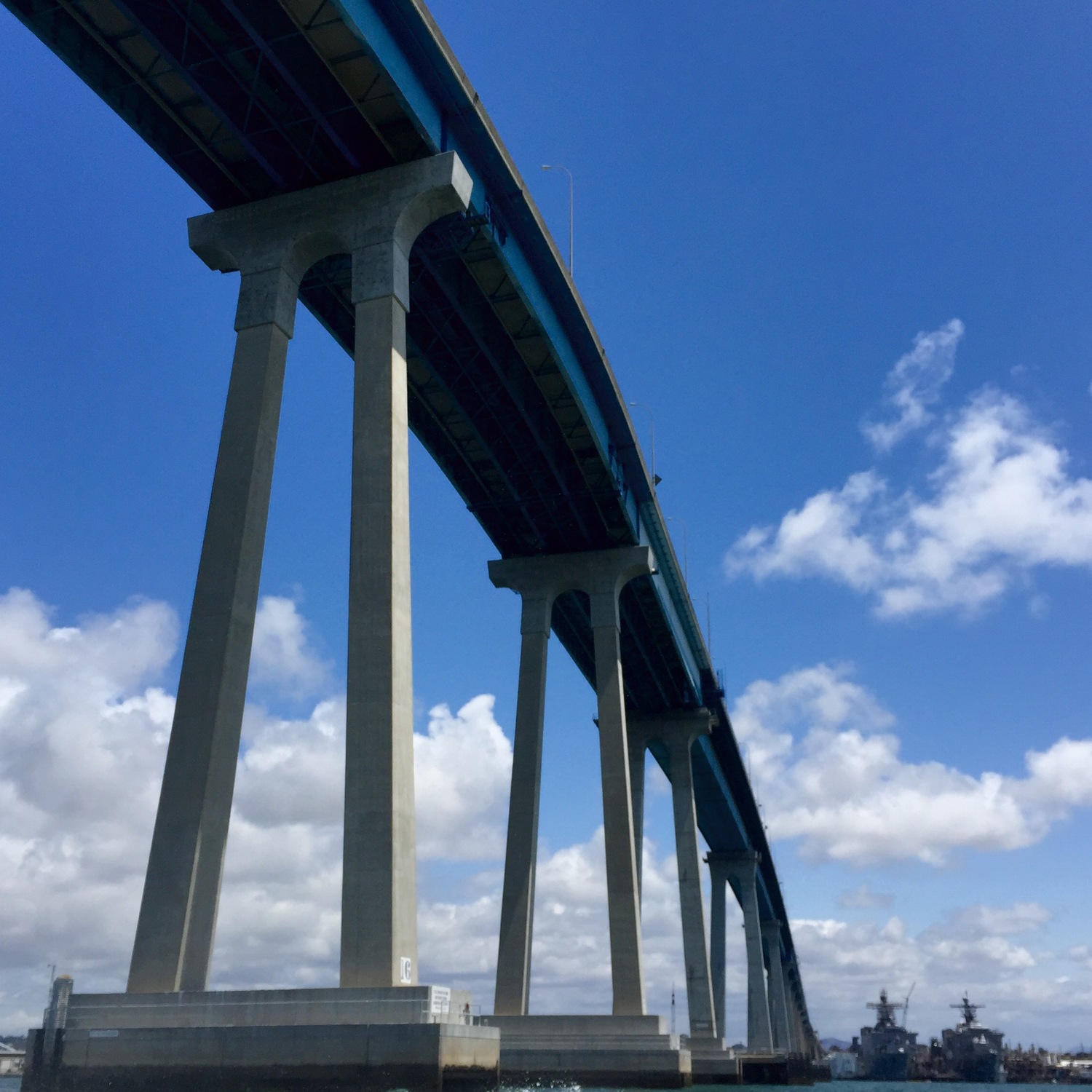 You may have driven on this $50 million bridge countless times but there is nothing like seeing it from the water. What an amazing structure! The bridge has a vertical clearance of about 200 feet (61 m) allowing enough room for the tall ships to pass underneath it.

San Diego is a huge military town. South of the bridge is sort of like an outdoor museum of the US Navy’s ships, submarines and dry-dock facilities. Some of these ships were massive and some of them have recently returned from months of deployment. 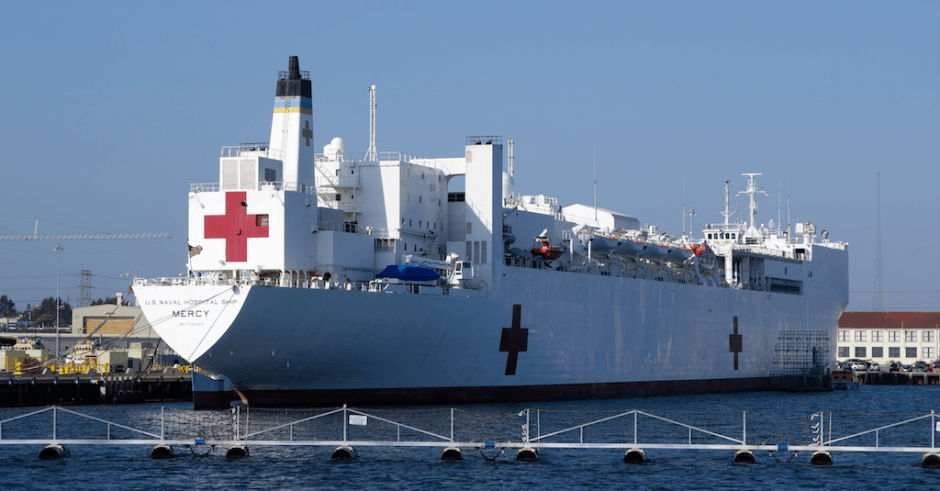 One of the most interesting things on the dock was the USNS Mercy. She was one of the Navy’ s hospital ships and has a total capacity of about 1000 patient beds and can be activated within 5 days. 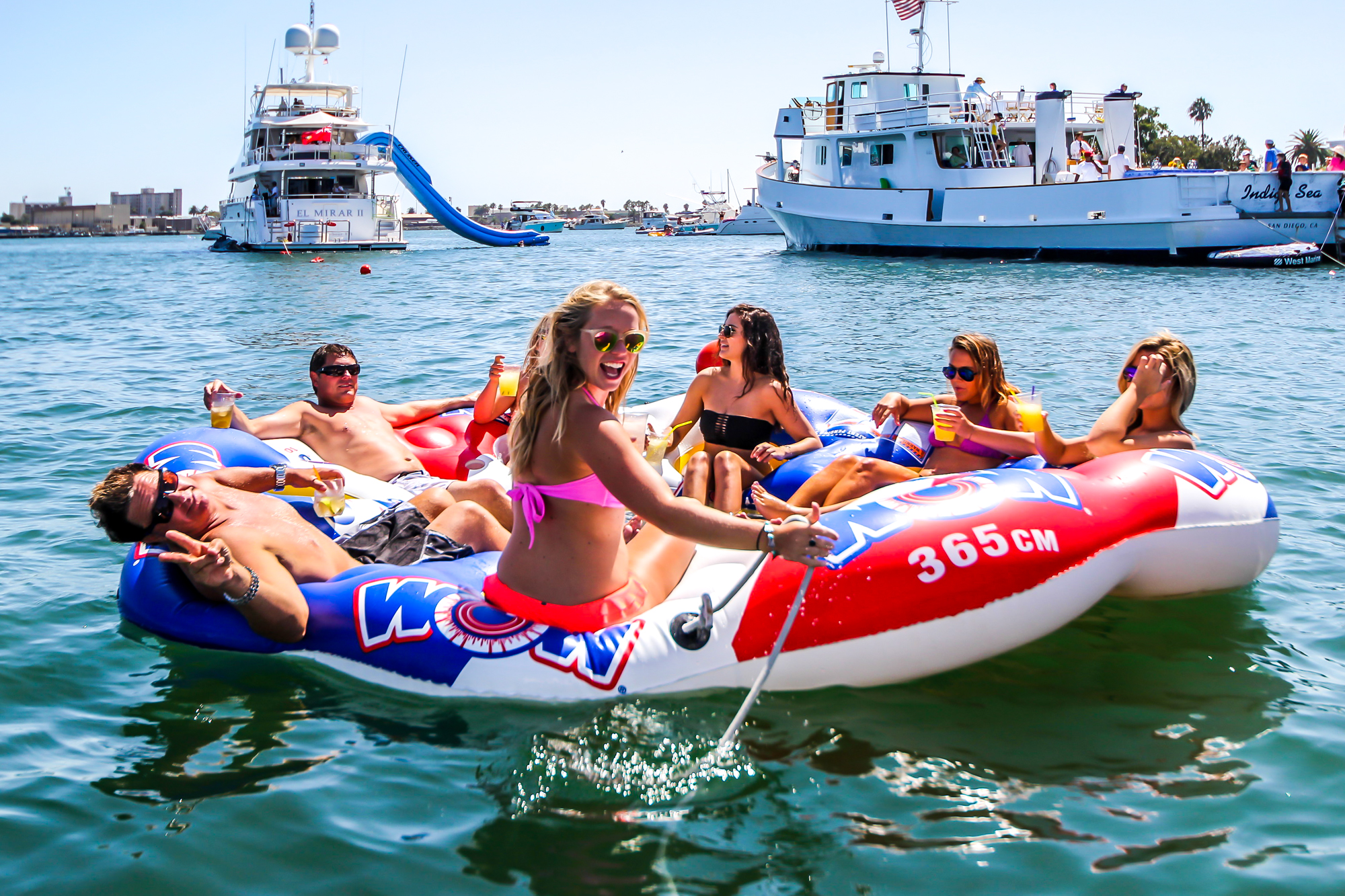 After cruising under the Coronado Bridge, we anchor for a bit to relax and have a cold beverage. The inflatable party island is an option for this portion of the charter. 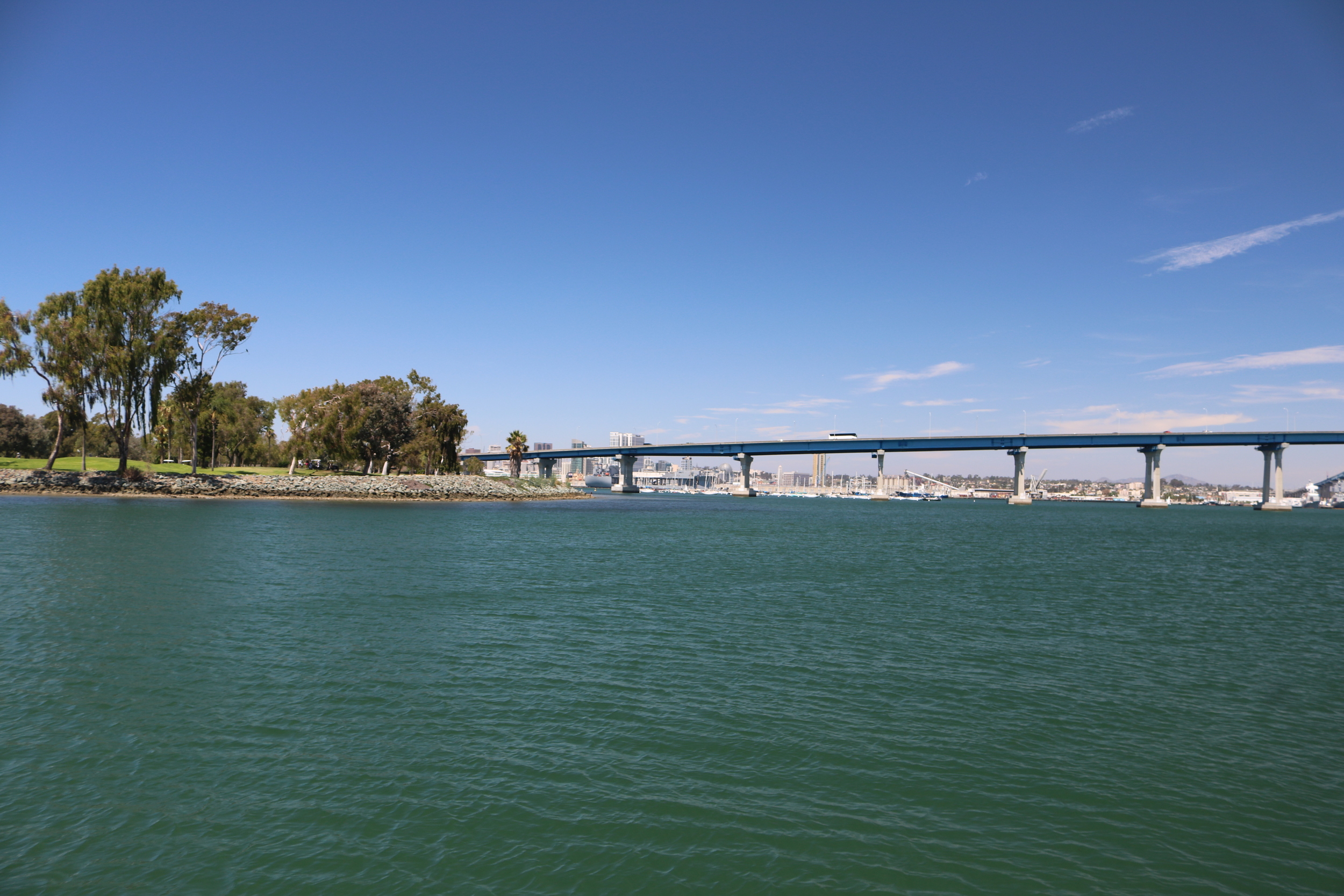 The anchoring spot to kick back and relax

On the way back to the harbor, we go past the airport and on to Shelter Island which is a man-made island that houses many marinas and Polynesian themed restaurants and outdoor summer concerts. This was created over 50 years ago using dredged up sand from the bay to make room for the big military ships. You will love seeing the harbor seals sun bathing along with some of the local birds. 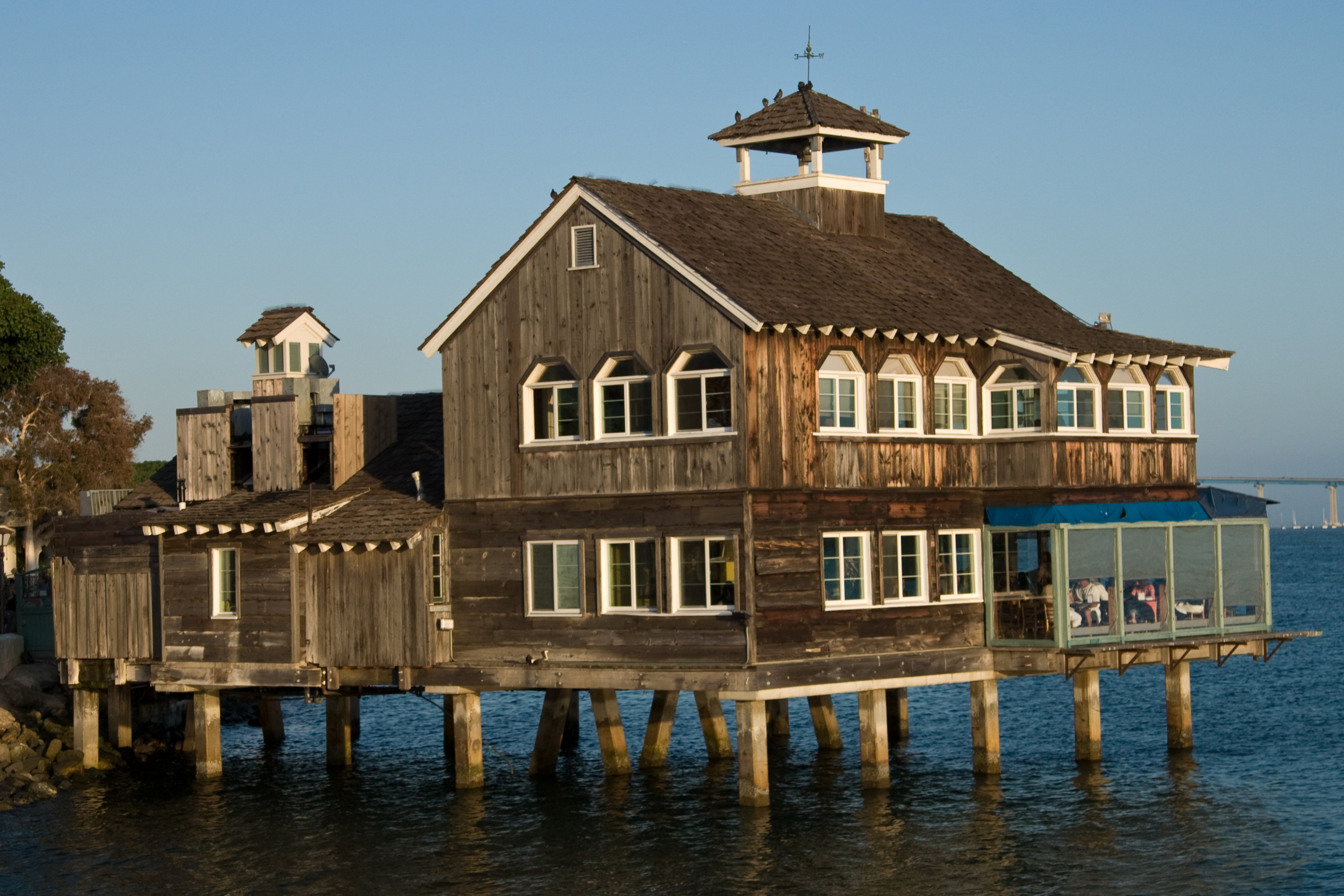 We will turn-around back to the downtown area and passed more of the city’s landmarks. It’s always a joy to see all the activity around Seaport Village. This area with 57 unique shops is a wonderful place for a stroll and the grassy area is always a hit with kids. 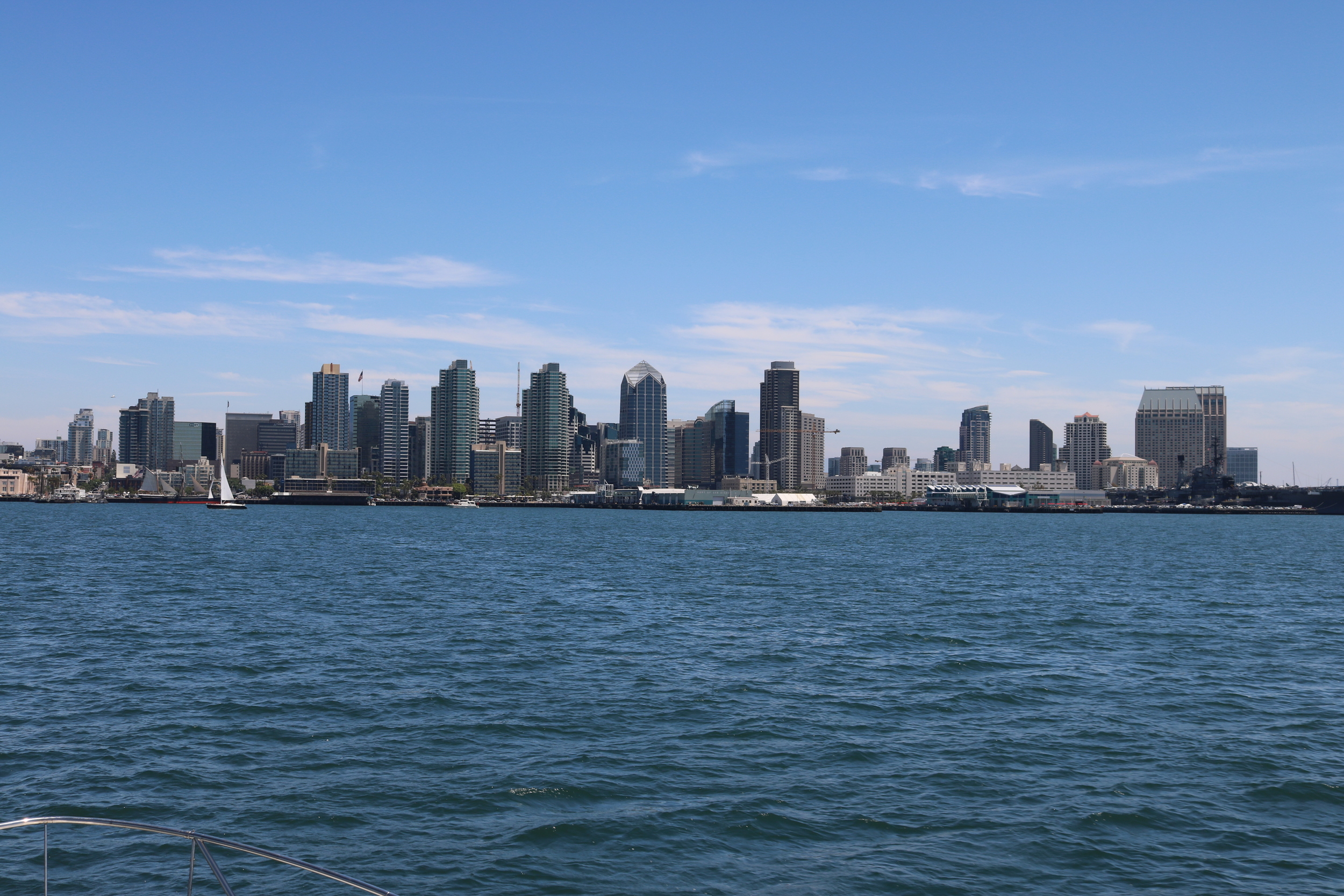 Cruising the Big Bay offers something for everyone including kids. It helps you appreciate the beauty of the waterfront and all the landmarks along it. If you’re here visiting, I hope this is one of the first things you do.